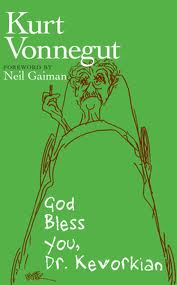 The American Novelist and Essayist Kurt Vonnegut is an intriguing figure that held a nuanced, and somewhat unconventional view on religion and faith. While he explicitly rejected the divinity of Jesus, he was nevertheless an ardent follower of his moral teachings and example. Often identifying himself as an agnostic or atheist, he also frequently spoke and wrote of God. His overarching philosophy centred on free-thought which lead him down some interesting philosophical avenues and informed his writing.

Take for example Vonnegut’s brilliant collection of essays entitled God Bless You, Dr. Kevorkian.  The premise of the book is that Vonnegut employs Dr. Jack Kevorkian (the infamous euthanasia activist) to give him a series of near-death experiences.  In so doing, Kevorkian facilitates Vonnegut’s brief conversations with St. Peter and access to heaven and those interesting characters in it. And so in the afterlife, Vonnegut interviews an eclectic mix of people that includes such notaries as Adolf Hitler, William Shakespeare and Isaac Asimov. What results is a fascinating and  humerous look at the after-life in which Vonnegut once again displays a more nuanced understanding of the divine than his purportedly humanistic moniker would seemingly allow.

God Bless You, Dr. Kevorkian is well worth a read, whatever your stance on faith and religion.