Text of a sermon preached at Cliftonville Moravian Church on 19th February 2017:

The Hebrew word for dream occurs 55 times in the Old Testament.  In the New Testament, the equivalent Greek word only occurs 6 times.  So it’s quite evident that the Hebrew Bible is richer in dream-like imagery than the Gospels and the Epistles.  Why might this be? Well, there’s certainly a cultural component and the understanding amongst the Hebrews and Isrealites that dreams transmit important information, and perhaps more importantly, were seen as revelations from God.

We all know what dreams are, but it’s really quite hard to describe them.  Eminent psychological thinkers such as Freud and Jung thought of dreams as a window into our unconscious.  For example, in Freud’s book published one hundred and seventeen years ago – ‘The Interpretation of Dreams’ – he describes the dream as the ‘royal road to the unconscious’; I love that descriptor.  But then Jung developed Freud’s thinking and expanded the understanding of dreams – he suggested that we had both an individual unconscious, but also a collective one too.  The implications of this are complicated, so I’ll leave it at that for now. Suffice it to say that we bring cultural and religious notions that reside deep in our subconscious, to the table, and these complement and inform what is unique to each and every one of us.

There was another Psychiatrist though who thought much about dreams and their importance – a man I’ve spoken about often: Viktor Frankl.  And he says this: ‘There is, in fact, a religious sense deeply rooted in each an every man’s unconscious depths’.  So for Frankl, the content of our dreams are necessarily religious, or perhaps more accurately, spiritual, in content and form.  And that’s fascinating given what I’m about to say about the Old Testament concept of dream analysis, and also what I’ve just said about it in passing.

But wait a moment.  I’ve said something about the content of dreams, but does not the unconscious and unconscious intertwine; are they two completely separate entities? And crucially, how do we interpret them? And that’s perhaps the most important point; the mechanics of it all is secondary to what the dream is telling us.  Traditional dream analysis works on the principle that during sleep our unconscious becomes conscious and we get a different, fuller, perspective on reality.

This is a quite brilliant quote ion dreams from the Zondervan Pictorial Encyclopedia of the Bible, that helps us to understand the nature of dreams and dreaming:

‘Bergson conceives of a dream as being the direct link between sensation and memory; being constructed around what we have seen, said, desired, or done, and their elaboration depends on memory images collected and preserved in the unconscious since earliest childhood. The same faculties function when we dream as when we are awake, but in one instance they are tense and in the other relaxed. The fullness of our mental life is available in our dreams, but with a minimum of tension, effort, or movement’.

I like that last sentence in particular: ‘The fullness of our mental life is available in our dreams, but with a minimum of tension, effort, or movement’.  Our lives become so much fuller when we understand our dream life.

But back to the Theological emphasis for a moment.  Again, according to the Pictorial Encyclopedia of the Bible, there are three main ‘types’ of dream: The first can best be described as natural (Eccl 5:3); the second is divine, or from God (Gen 28:12), and the third is a different category altogether – evil (Deut 13:1, 2; Jer 23:32). But the most important, and frequent issue the word ‘dream’ in the Old Testament relates to a message, in some shape or form, from God.

So let’s consider our reading for today. The Pharaoh, a man to be feared, had had a previous set of dreams and had asked all manner of individuals to interpret them for him; he was angst ridden and had no idea what the future held for him.  And none of us, especially when we feel like we are in a particularly precarious position, like or can even tolerate uncertainty. 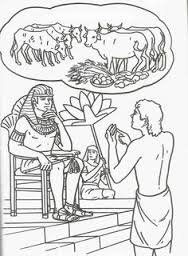 The Pharaoh repeated the dreams that he had to Joseph, adding only slightly more detail, that is the comments about the ugliness of the cows; this was obviously significant for him, although like many aspects of our dreams, is rather strange. It seems that he equates ugliness with ‘evil’ and contrasts it with ‘good’ cows.

So we have good and evil, a construct that ultimately comes from God.  There’s continuity here – the earlier chapters of Genesis are, of course, all about good and evil. The dream is a vehicle for exploring this and making a truth apparent.

The Pharoah’s dream comes from a troubling subconscious that makes itself known in his conscious world.  And his dreams repeat themselves until he gets some form of resolution to what they mean and what they’re telling him.  You may have experienced this yourself.  We often have what are called ‘stress dreams’ that are repetitive and appear on the scene when we’re worried about something, someone or some situation. Or maybe our consciences are troubling us – we’ve done something we shouldn’t have, or we omitted to do something we should have.

So, we can learn a huge amount from dreams. I’d love to spend so much more time on this topic – it’s so rich and deep and meaningful. From our faith perspective, our Old Testament is particularly rich in this respect.  Freud and Jung have some points of contact with OT dream analysis, but perhaps the most ‘connected and holistic analyst was Viktor Frankl.  His book ‘The Unconscious God’ is a perfect example of how important our religious and spiritual lives are and how they manifest themselves in our dream lives. His foresight and insight can be used by you and I today; we don’t need to be trained in dream analysis – although that can help – we just need to pay attention to our dreams and our lives.